New Indian Model School, Dubai took the first steps in Model United Nations five years ago. Since then, we have made our mark in various national as well as international platforms, learning and growing in the process. From our primal BVC MUN 2015 to our very own NIMS MUN, NIMS has strived for perfection in every setting.

MUN has helped our students reach out to their inner leader and diplomat. Several students of ours have breached traditional barriers to reach their full potential through Model United Nations. Holding our motto ‘From MUN to the real UN’ at the heart of every conference, NIMS MUN too has become a regional success seeing participation from several eminent schools. MUN has brought together a strong circle of spirited and driven young leaders partaking in several conversations on the future of our world along with promoting the Sustainable Development Goals in and out the NIMS campus. NIMS MUN has also succeeded in providing students with an innovative, responsive and intellectual platform to discuss and debate topics of interest.

The NIMS MUN delegation has also had the privilege of representing the regional team in several renowned international MUN platforms. 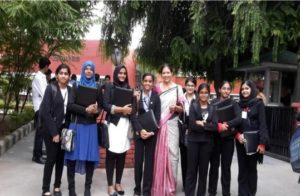 NIMS began its journey in the grounds of BVC MUN in 2015 with eight delegates representing countries in various committees. This experience provided our students with an exciting opportunity to meet and work with the oldest and most respected MUN organisations in India and later set up our very own NIMS MUN. We return annually to the MUN that kick started our MUN community.

NIMS continued its relation with the BVC MUN, Chandigarh in 2018 with 10 participants from NIMS Dubai and is one among the international schools to attend the conference bagging Best Position Paper Award and Honorable Mention. 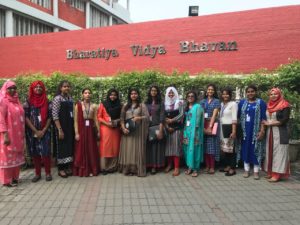 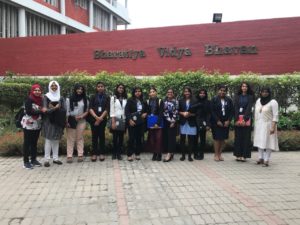 AUS MUN possessed the opportunity to leave our mark at universities committees. AUS MUN 2017 and AUS MUN 2018 provided a wonderful opportunity for our young delegates to learn from experienced regional delegates and to gain an insight on the working of a strong MUN team. Krishna Satheesh won Best Researched award at AUS MUN 2020 and Shamma Special Mention at AUSMUN 2017. 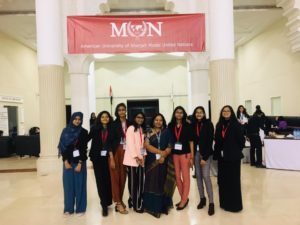 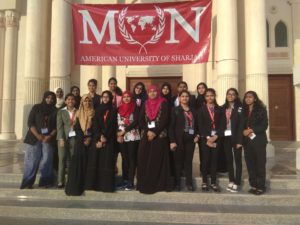 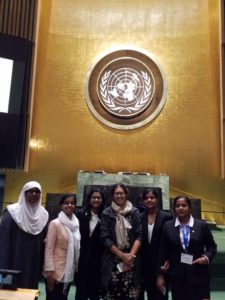 NIMS was met an enormous opportunity when it was welcomed to participate in WFUNA International Model United Nations 2018 hosted at the UN Headquarters New York. Witnessed two of our students, Shifana Sherin and Murshida Begum, representing the vice chairs of various UN committees and one student, Krishna Satheesh, presented her research at the UNGA podium as the Delegate of Ecuador. It was one of the most privileged moment for NIMS Dubai. These achievements paved way for NIMS’s active participation in the SDG realm and UN youth programs. 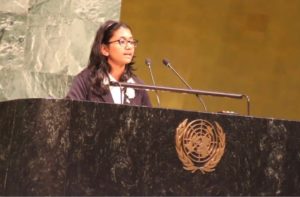 Krishna Satheesh presenting her speech on ‘How to maintain peace and security in the country of Ecuador’ at the Green Marble UNGA podium. It was the opportunity of a lifetime as she the youngest among twelve selected participants to speak and was surrounded by the most influential people within the UN and WFUNA. 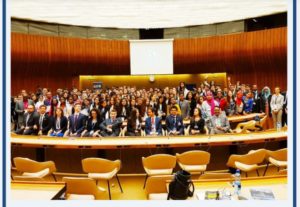 UNAMUNC Geneva 2018 observed a delegation of three students, Lisa Susan, Kavitha Madras and Anaya Sreesan, from NIMS Dubai. It was an amazing opportunity to meet the permanent UN representatives of various nations and hold conversations with them regarding important diplomatic relations.

Delegates from NIMS Dubai with the Indian representatives and in front of the United Nations Headquarters, Geneva, Switzerland. 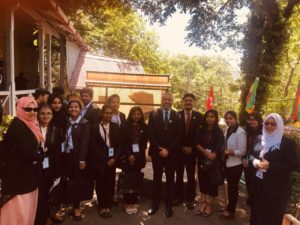 We also returned for the third edition of SNAMUN 2020 online conference. Three days of intensive debate, speeches and diplomacy can to an end with captivating results. 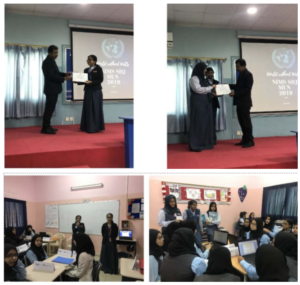 n an effort to spread the opportunities that come along with MUN to our sister schools, three students, Lisa Susan, Krishna Satheesh and Aasiyah Arshad, visited NIMS Sharjah to hold NIMS SHJ MUN 2019. They contributed as chairs and resource persons for the conference teaching their fellow peers about MUN and the conducts and procedures of MUN.

Following the events of 2020, our delegation resumed their MUN ventures online.
The NIMS delegation was extremely proud and delighted to take part in the “Conciliation MUN 2020”, a youth charitable organization which has all its proceedings donated for charity purposes and has its roots set in Singapore. The virtual conference took place on 4th-5th July 2020 via Zoom meetings in collaboration with Gyan Shakti Rashtriya Yuva Sansad, MUN Hub, Cyber MUN Chronicles and Indian Accord Model United Nations and many other affiliated MUN platforms. There were 8 participants from NIMS DUBAI out of which 4 bagged various positions, including a High Commendation award, awarded to Kruthika Chavan A special mention awarded to Krishna Satheesh and two honourable mentions to Lisa Susan and Sreyangshi Lodh. The winners were acknowledged with e-certificates and cash prizes! 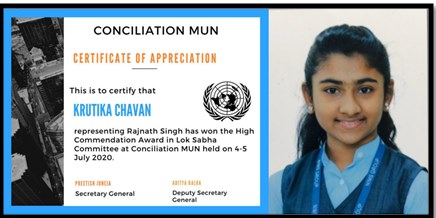 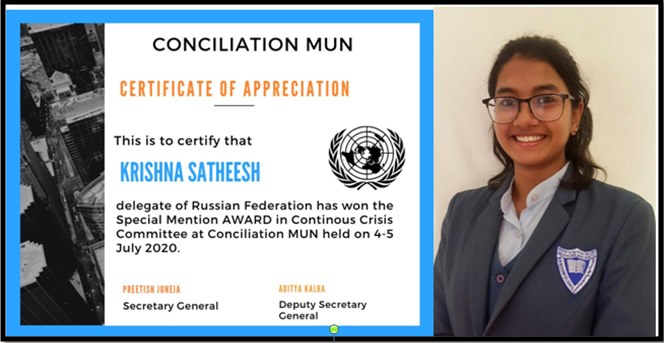 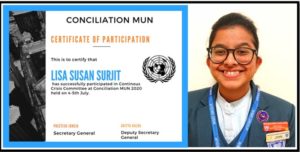 International Diplomatic convention was another incredible opportunity where Krishna Satheesh was invited as the Chair for UNHCR committee discussing ‘the impact of COVID 19 across refugee communities’. It was a wonderful opportunity to enlarge our circle of global MUN acquaintances and to work with seasoned professionals in the field.

New Indian Model School, Dubai have always been extremely proud of these young talented leaders voicing out their opinions and views to shape this world to a better place. It is not about winning awards but the knowledge of the reality. This indeed is a great achievement for NIMS Dubai always and will forever continue this journey future leaders. Students always reflect to the motto of NIMS MUN, which is “FROM MUN TO THE REAL UN”. This isn’t the end for the students of NIMS Dubai, they have taken it as a challenge to spread awareness about Model United Nations by inculcating the knowledge right from grade 7 to 12 by organizing MUN clubs and public speaking events. We haven’t still made it yet cause we need more and more young talents to join us in this journey, so will you ?